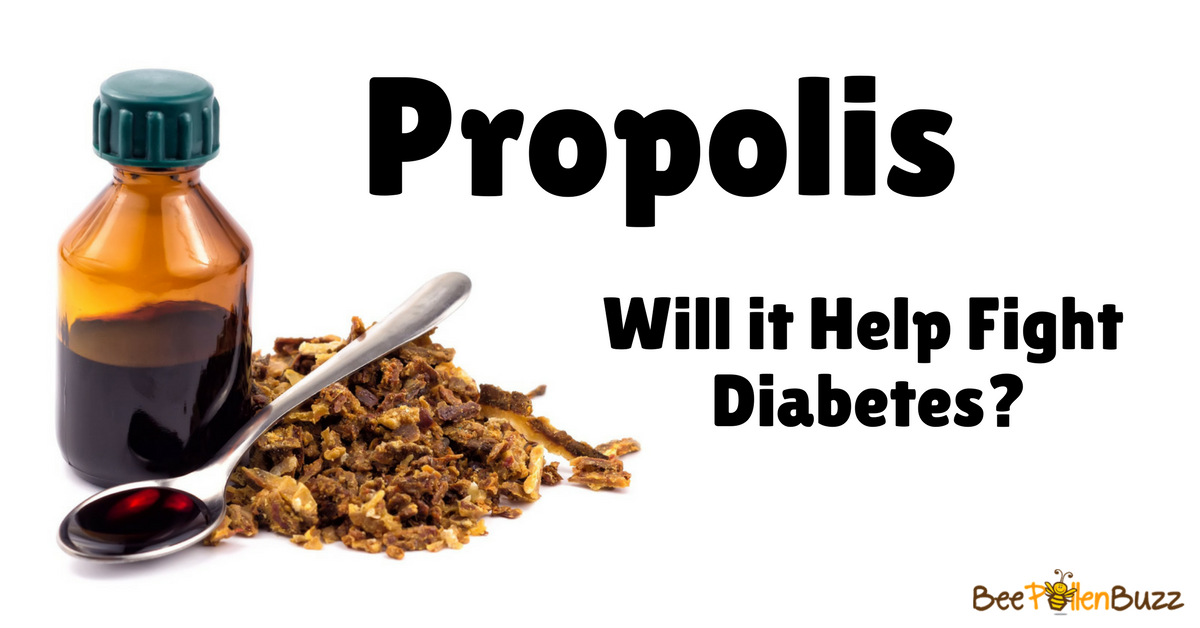 As of 2012, in the US alone over 9.3 percent of the population, that’s 29.1 million people, were either diagnosed with diabetes or thought to currently remain undiagnosed (1).

The effects, not only at an economic level, but also in respect of individual suffering and diminished quality of life, are then monumental. Yet the figures keep on rising, and it would seem the most contemporary medicine can achieve is to manage not only the condition itself, but also the myriad health issues which arise as a direct result of the disease.

So, while scientists battle with the problems relating to cause, effect and a drug cupboard of contemporary treatment options which are quickly diminishing, the beneficial properties of propolis as a natural alternative are being investigated with increasing frequency.

The medicinal benefits of propolis have long since been renown and it is thought that this arises due to the complex and varied nature of the compounds it contains. Research in some cases has identified around 160 components, while others have found more than 300 (2). It is likely though that many more have yet to be discovered.

When it comes to diabetes in particular, propolis was first acknowledged back in 1988, as having the capacity to regulate the condition primarily because it acts in an anti-hyperglycemic capacity stabilizing blood sugar glucose (3).

Since then though, there has been an increasing number of studies, all of which appear to evidence that propolis can mitigate the condition to one extent or another.

Many of the studies though have been performed within the laboratory. Although there were always strong indications that propolis is at least effective in reducing lipid peroxidation and scavenging free radicals in animals, and so was likely to affect both of these contributory factors in human sufferers of type 2 diabetes (4).

However, more recently trials have taken place which involved measuring the effects not on rodents, but on real people. The latest is a study published in 2017 (5) where 66 patients with type 2 diabetes, were divided into 2 groups: one received 900mg of propolis per day for 12 weeks, and the other a placebo.

Although numerous potential effects were monitored, the major findings were that fasting blood glucose over the study period decreased in the group receiving propolis and increased in the control group who were taking the placebo. What they also found was that total cholesterol levels fell in the propolis group although they rose correspondingly in the control. It would seem then that the earlier animal research had been correct.

Although the trial concluded that propolis had no significant effects on insulin resistance, because of the effect on blood glucose and some lipids, the research suggests that propolis may well play a future role in managing and reducing the effects of the condition.

What also has to be taken into consideration, of course, is that the trial period was for a relatively short time, only 12 weeks. The long term effects of this natural treatment, which by definition requires lifelong treatment, are yet to be established. Hopefully, we won’t have to wait too long to find out!

In another study conducted with 62 Type II diabetic patients who were given 1500 mg of propolis per day for eight weeks, it was found by researchers that those receiving propolis had several notable improvements over those that received a placebo.

Researchers recently did a systemic review and meta-analysis of studies on the effects of propolis on markers of glycemic control in people with type 2 diabetes. They looked at randomized control studies reported in PubMed, Scopus, Google Scholar, Web of Science nad the Cochrane Library. Altogether, they were able to analyze six studies involving 373 participants.

Across these studies, the researchers found that people taking propolis had significant reductions in their fasting plasma glucose and in their hemoglobin A1C. These are two important markers that can be used to assess blood sugar levels.

Controlling glycemic levels is very important for people who suffer from type 2 diabetes. When glycemic levels go too high, they can cause short term symptoms that include headaches, excessive thirst, trouble with concentration, fatigue and weight loss. Left unchecked over time, high glycemic levels can cause painful nerve damage, damage to organs that include the skin, kidneys and eyes, and cuts and sores that are slow to heal and prone to infection.

While the study did not find that fasting insulin or insulin resistance was improved with a propolis supplement, the control of glycemic levels can help improve the health of people with type 2 diabetes immensely. Over time, when combined with a healthy diet and other measures, it can help reduce the damage that is associated with type 2 diabetes and help sufferers feel better from day to day.

Chronic high blood sugar can have serious impacts on other health issues. However, research is showing that, with the help of propolis, these other impacts can be somewhat ameliorated, allowing individuals with diabetes to enjoy better general health.

In a double-blind, randomized controlled trial study, researchers had 62 type 2 diabetes patients participate in a study on the effects of daily doses of propolis. Half of study participants received a placebo; the other half took a capsule containing 500 mg of propolis three times per day. The study participants were followed for an eight-week period.

Researchers measured the levels of oxidized LDL, fructosamine and catalase activity at the beginning and end of the eight-week period. Oxidized LDL is a harmful sort of cholesterol. It is produced by your body when normal LDL cholesterol becomes damaged during chemical reactions with free radicals. Left unchecked, high oxidized LDL levels can lead to a hardening of the arteries, which increases the chance of heart attack and stroke.

Fructosamine is a compound that is formed in the blood when your body combines glucose with protein. Fructosamine levels are often measured to show what the body's general blood glucose level.

Catalase activity is another word for your body's breakdown of hydrogen peroxide into oxygen and water. When catalase actitity is normal, it means that your body is properly metabolizing the sugar that you consume.

They found that the levels of oxidized LDL and fructosamine decreased. Meanwhile, catalase activity improved. Regular propolis consumption allows your body to function more normally even with type 2 diabetes. It can also help you avoid many of the long term health effects that might otherwise occur in someone who is a diabetes sufferer. By attending to the side effects of diabetes, you can keep your energy levels higher and help get back to full health.