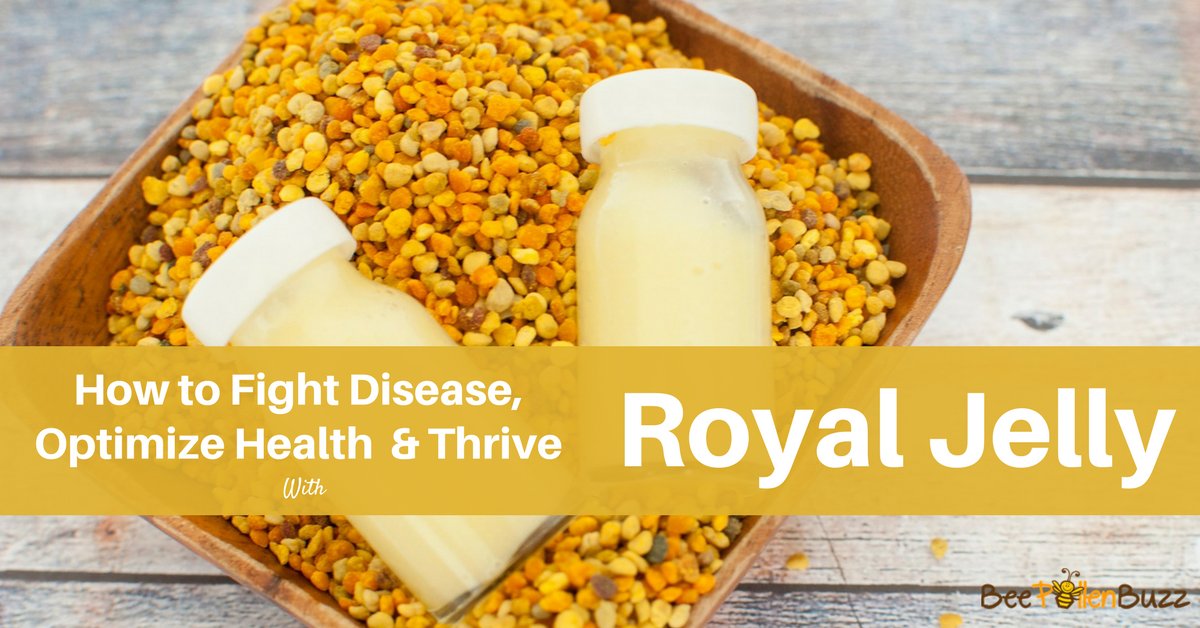 The health benefits of royal jelly are extensive and universities around the world are now studying this magical compound more and more frequently in an attempt to further understand it.

I'm a believer - I've been taking Royal Jelly for years and there is no doubt in my mind that royal jelly has enhanced many aspects of my health.

The health benefits of royal jelly sometimes seem too good to be true.  There are simply so many health conditions that this natural compound can help with.

There is no question that it helps me as an overall vitality tonic as well as aiding to balance my hormones.  The ultimate test to determine whether a supplement is 'right' for me is when I go off it.

How do I feel? Did I feel better when taking the supplement?

When performing this test on royal jelly, I noticed a drop in energy and general sense of well being. I found I slept better when taking it and recovered faster from my workouts as well. And my skin just didn't seem as healthy - it didn't glow!

So back on Royal Jelly I went.

Growing up on a bee farm with a mother who was passionate about nutrition and supplements, I've had the opportunity to take many different supplements.  And Royal Jelly will never leave my medicine cabinet.  That being said, I was doing a quick search on PubMed the other day to see how many scientific studies have been done on royal jelly and the sheer volume of research was staggering.

Clearly, the brightest scientific minds in the world see 'something' with this substance as there are now studies on Royal Jelly showing its effects on countless different conditions.

So here are the Top 10 Health Benefits of Royal Jelly that are both supported by science but also by my experience using it in the real world.

Antioxidants are all the rage today and for good reason. When your cells oxidize, YOU oxidize and that leads to greater instances of cancer, heart disease and other degenerative conditions.

We've all seen a peeled apple turn brown within minutes - well, that is literally what happens to your cells over your lifetime. But scientists have discovered certain foods have massive amounts of antioxidants that slow and even stop this process.

Royal Jelly just so happens to be one of these foods. As reported in the Journal of Agricultural Food Chemistry in 2008, Royal Jelly contains very high amounts of several antioxidants.

And what the scientists learned was that RJ had higher amounts of these antioxidants when the Royal Jelly was fresher. So when buying RJ, ensure that you are buying fresh, frozen product to maximize the vitality of the product.

Because Royal Jelly is being indicated to have immuno-modulatory potential for humans, a group of scientists at the University of the Ryukyus in Japan undertook a study to determine whether RJ could alter the development of systemic autoimmunity in mice.

Autoimmunity is a state in which the body's immune system attacks itself. Disease like Rheumatoid Arthritis and many allergies are autoimmune disorders.

These mice were genetically predisposed to get Lupus, a serious auto immune disorder.

During the study, the scientists found that the mice getting the RJ supplement saw a significant delay in getting Lupus and once they did get it, lived significantly longer than the mice that didn't get the supplement.

And while humans aren't mice, this study certainly supports the many testimonials of people who have reported using Royal Jelly to boost or balance their immune systems that I've encountered.

Our customers and client often tell us how they experience a mild euphoria or feeling of clarity upon taking our high quality, fresh royal jelly.

Now a study out of Gifu Pharmaceutical University in Japan has shed some light on why this happens.

Scientists fed rats a toxic compound designed to kill brain cells and then gave them Royal Jelly. They found that not only did royal jelly protect the brain, but it also stimulated cognitive function and repair to the brain.

When I first read this study, these results made tremendous sense to me. I had always felt that I was more alert and 'awake' when taking royal jelly. But I'd usually just shrug it off as perhaps a placebo effect or just a good sleep that night! Now I know that royal jelly was enhancing my brain and it wasn't just 'all in my head.'

To be honest, I was not aware that Royal Jelly had liver protective abilities until I read this study. And don't ever underestimate the importance of keeping your liver healthy - everything you ingest goes through it to be filtered. So your liver is ultra important to your overall health.

Believe me - I've met many people with toxic or impaired livers and it is a very challenging health situation which can often lead to liver cancer. Simply drinking tap water today will expose your liver to over 200 toxic compounds alone. This makes the protective effects of Royal Jelly even more important.

Scientists at University of Erciyes in Turkey fed royal jelly to mice that had been given a liver toxin. They found that the administration of royal jelly as a liver protective agent for only 7 days exhibited a marked protective effect on liver tissue from the liver toxin.

A tremendous amount of research is now showing that chronic inflammation is one of the root causes of heart disease and other degenerative diseases such as Alzheimers disease, arthritis and even some cancers.

A group of scientists at Hayashibara Biochemical Laboratories in Japan decided to test the anti-inflammatory activity of Royal Jelly. They tested for pro-inflammatory cytokines such as TNF-alpha, IL-6, and IL-1. High levels of these compounds indicate high levels of inflammation.

The scientists found that the administration of Royal Jelly suppressed these pro-inflammatory compounds and concluded that RJ has anti-inflammatory actions.

So, if you have a history of heart disease or Alzheimer's disease in your family or better yet, you've had your IL-6 levels tested by your doctor and they are elevated, Royal Jelly is likely an excellent supplement for you.

Scientists at the Department of Pharmacology, Nihon University in Japan set out to discover whether or not Royal Jelly can augment wound healing.

They fed rats various amounts of royal jelly daily and found that it showed anti-inflammatory activity by decreasing exudation and collagen formation.  Royal Jelly also shortened the healing period of skin lesions, enough so that the scientists stated that royal jelly is able to augment wound healing.

This comes as no surprise to those of us who have used royal jelly for skin health over the years. Royal Jelly contains specific nutrients and vitamins that support skin renewal such as flavonoids, nucleic acid, decanoic acid, enzymes, and hormones.

It also contains numerous vitamins and minerals such as vitamins B1, B2, B3, B5, B6, acetyl-choline and zinc, all of which are excellent for the skin. Studies indicate that the acids found in Royal Jelly contribute to its collagen production and promotion.

Earlier studies have shown that royal jelly has insulin-like activity. However, there have so far been no clinical trials to support these findings. So, a group of German doctors at the Justus-Liebig University Hospital in Germany had twenty volunteers undergo the standardized oral glucose tolerance test (OGTT) and afterwards a second OGTT after ingestion of 20 g of royal jelly.

The doctors found that after 2 hours, the serum sugar levels of the 20 volunteers were much lower after taking the 20 g of Royal Jelly than when they didn't take it.

So, if you have any type of blood sugar issue, try supplementing with RJ. (if you are on insulin or Metformin, make sure you monitor your levels carefully - RJ will reduce your sugars)

A group of Japanese scientists hypothesized that Royal Jelly may have beneficial effects on osteoporosis.

After conducting a study on both rats and in a test tube, the doctors found that RJ may prevent osteoporosis by enhancing intestinal calcium absorption, making it an effective preventative aid for osteoporosis.

It makes a lot of sense to supplement with Royal Jelly along with your calcium and vitamin D if you are suffering from osteoporosis or have a history of it in your family. According to this study, RJ will enhance your body's ability to absorb the calcium and in turn deposit it in your bone structure.

A group of scientists at Kyushu University in Japan looked at the protective effect of Royal Jelly on breast cancer cells.

The study found that Royal jelly inhibited the growth promoting effect of BPA on breast cancer MCF-7 cells, even though it did not affect the proliferation of cells in the absence of BPA.

We are all exposed to dozens of cancer causing environmental estrogens every day now through our drinking water, our cosmetics, plastics and our food. You may be wise to protect yourself from these cancers with a daily dose of fresh royal jelly.

A group of researchers in Japan decided to examine the effects of Royal Jelly on blood cholesterol levels in 15 volunteers.

They gave half the volunteers 6 grams of Royal Jelly per day for 4 weeks. Those taking the RJ saw their total cholesterol and low-density lipoprotein (LDL) decreased significantly compared with those who didn't get the RJ. HDL (the good cholesterol) levels didn't change in either group, nor did triglyceride levels.