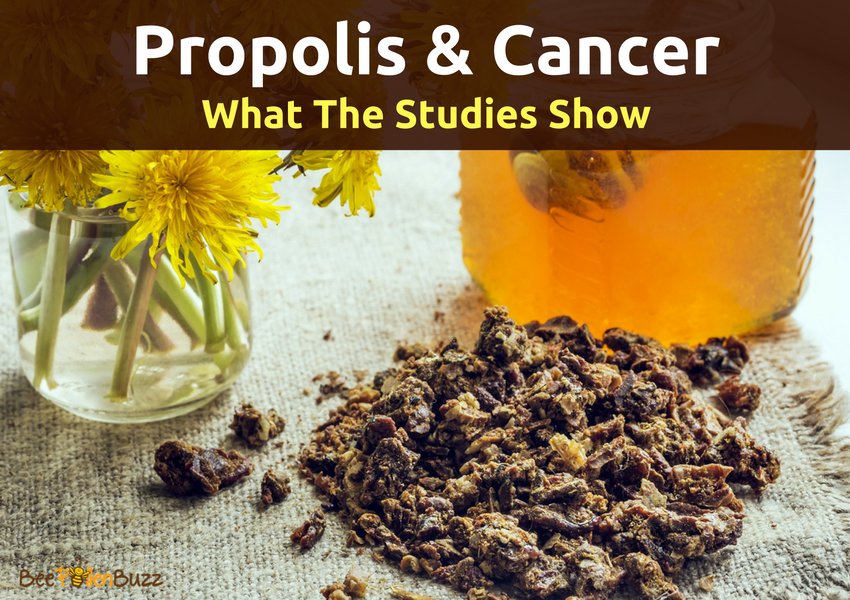 This is very exciting but before we go proclaiming that propolis cures cancer, it is important to keep in mind that these studies have been done in test tubes and animals only. Large human studies have not yet been completed.   This must be kept in mind, especially if you are a cancer patient and looking for alternative options or if you are looking to prevent cancer.

According to Dr. Patel's review, studies conducted around the world have shown that Propolis has efficacy against the following cancers:

It was found that the mechanism by which propolis alters cancer cells are through the following means:

Propolis has as many as 300 compounds within it that show biological activity.  The components conferring the most promising anti-tumor potential have been identified as:

If you are using Propolis for it's anti-oxidant properties or for an anti-cancer benefit, it is important that you use a quality product that has these active compounds in it.   Propolis from different geographical areas will contain different compounds in different amounts. Low quality propolis may have none of these in them at all.

In a study published in the Journal Molecular Nutrition and Food Research, researchers examined the antiangiogenic and antioxidant activities of the various components from propolis listed above.

Two propolis components, caffeic acid phenethyl ester, and quercetin, possessed strong inhibitory effects on tube formation and on endothelial cell proliferation. What this means is that they prevented new blood vessel networks from forming to supply the cancer cells with blood.   When this occurs, the cancer cells can not grow into dangerous tumors.   These compounds also showed strong antioxidant activity.

The journal Online Reports published a study in August of 2009 in which it was examined whether alcohol based Chinese and Brazilian propolis tinctures may exert anticancer activities in four human colon cancer cell lines.

In three of the four cells, the extracts of both Chinese and Brazilian propolis caused a significant dose-dependent growth inhibition.  It was also noted that in one cell line, Chinese propolis extract induced apoptosis (cancer cell death) in the cells after 72 hours of treatment.

These findings clearly indicate that propolis contains components that may have anticancer activity.  However, additional research is badly needed.  The next step for researchers will be to conduct human studies to determine if these test tube studies can be successfully replicated in cancer patients.