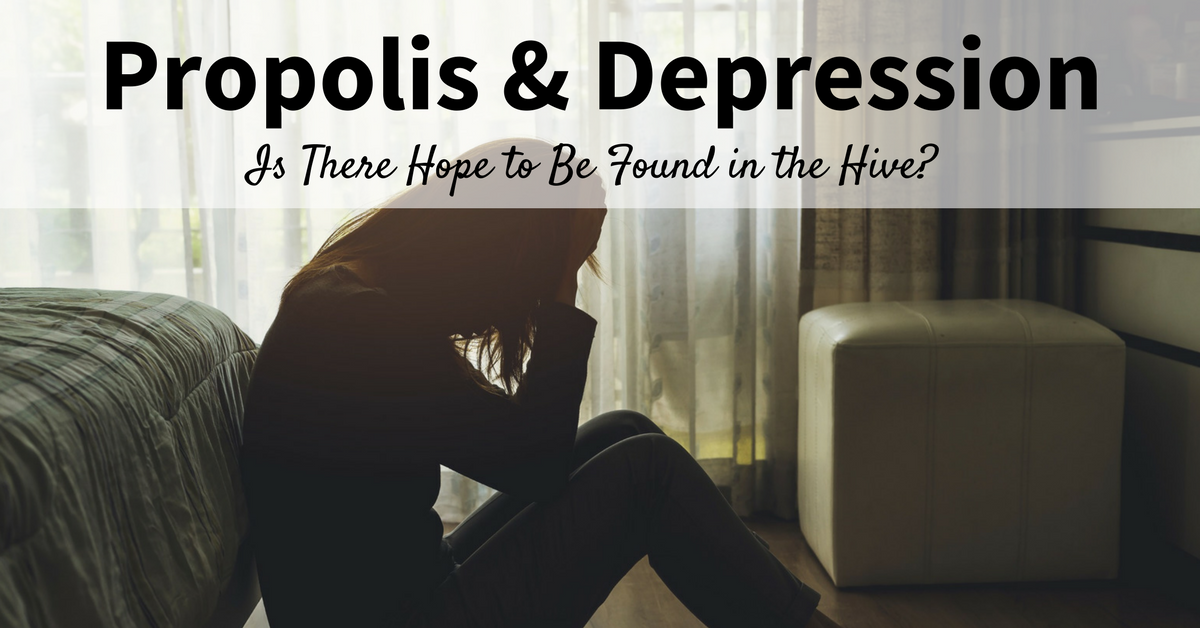 Depression is a massive health burden with over 350 million people suffering from it globally.  As a result, drugs like Prozac are massive sellers.  For those who want to avoid these drugs, effective natural options have been limited.  However, ground breaking research on propolis & honey may be changing that.

In the western world today the most commonly treated illness is depression. In the US alone the number of people diagnosed with depression increases by 20% every year - and, even then, it is estimated that the majority of people with the illness, around 80%, do not seek treatment.(1)

Depression, of course, despite the best efforts of many, still carries with it a social stigma. Add to that the problems associated with side-effects and many patients feel that, when it comes to antidepressants, the possible benefits do not outweigh the negatives. Yet propolis is proving to be a potential alternative treatment for depression, and without the side-effects, in many emerging research studies.

Propolis Effects on Depression: The Studies

One study, which was published in 2016, looks at the effects of Chrysin, a flavonoid which is found not only in propolis but also in honey, on mice which had been subjected to unpredicted chronic stress. What they discovered was that chrysin given as an oral preparation of 5mg or 20mg per kilogramme given over 28 days, produced beneficial results equal to that of fluoextine, which is more commonly known by brand names including Prozac and Sarafem.(2)

Another study which was published back in 2013 looked directly at the effects an extract of propolis has on the function of the hippocampus - the area of the brain in which many problems relating to depression are associated. What this study revealed was that propolis enhanced the function of the hippocampal glucocorticoid receptors - the activity which is often decreased in people who are depressed. They also commented that the therapeutic mechanisms of many contemporary antidepressants include this activity. Which, in short, means that propolis appeared to work in the same way as antidepressants to lift mood.(3)

Is CAPE the Magical Compound in Propolis?

In 2014 the same research team which performed the 2013 study, were so intrigued by the beneficial effects of the propolis extracts, that they decided to investigate which component, out of the 200 or so that propolis contains, was likely to be responsible for the improvements. They were aware that caffeic acid phenethyl ester (CAPE) had several effects not only on the central nervous system but also glutamate induced neurotoxicity, and concluded that, combined with the effects shown in their previous study, CAPE was likely to mediate depressive symptoms.

Although there were numerous biochemical markers measured, when it came to physical responses, what the research indicated was that their initial hypotheses was correct and, animals in specific groups given CAPE showed significant improvement in actual physical symptoms. They also reported that the results were consistent - unlike the control groups which were treated with fluoextine.

The conclusions reached by the team, strongly suggested that CAPE may provide an alternative treatment to standard antidepressants, not only for mild cases, but also those suffering from major depressive episodes. (4)

Research at the moment is only in its infancy, however all the emerging work suggests that propolis may provide those suffering from varying levels of depression, with some relief from the symptoms that is at least equal to that of many popular antidepressants and which results in no significant side-effects.

If you are one of the millions of people around the world who would prefer to use natural compounds to support your mood and counter the debilitating effects of depression, consider the following research backed supplements and foods.

Also get 30 - 45 minute of exercise (walking is fine) per day along with at least 30 minutes of direct sunlight.   If you can't get outside, consider using a HappyLight which provides UVB rays.