How Propolis and Honey Beat MRSA, the Untreatable Hospital Superbug 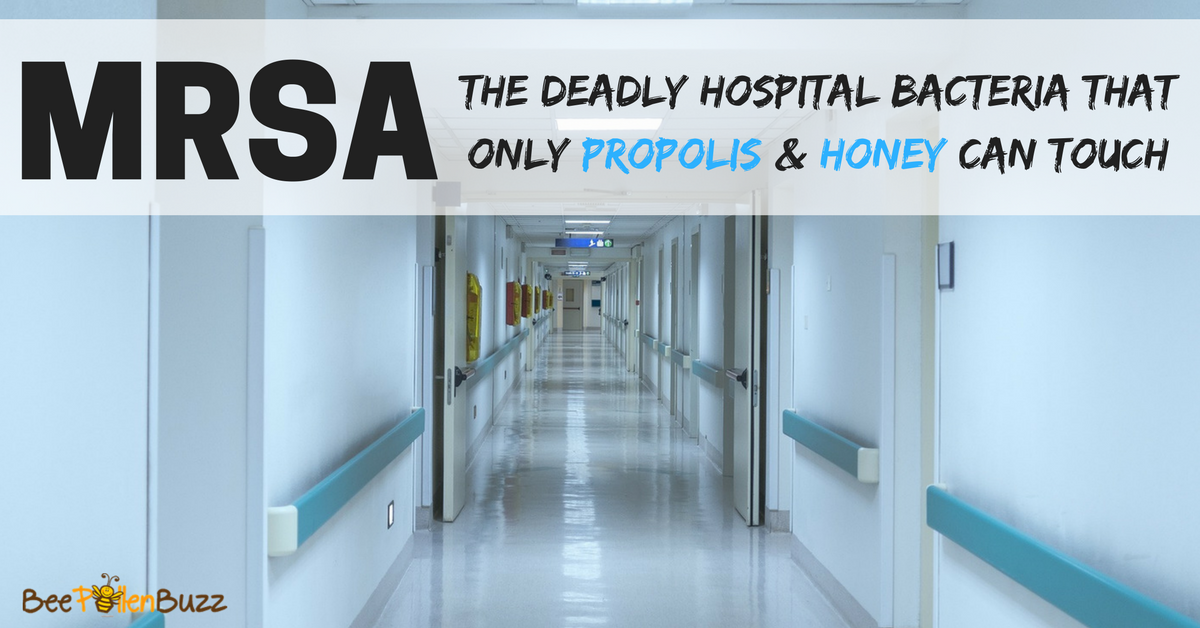 As antibiotic use continues to rise, resistant bacteria has risen with it. Methicillin-resistant Staphylococcus aureas (MRSA) is one of the most concerning of these drug-resistant pathogens. MRSA is endemic in hospitals throughout the world and many patients are at risk. In California alone, a recent study found that one out of every 100 people who stayed in the hospital contracted MRSA at some point. About half of people admitted to the hospital for MRSA contracted it either during their current stay or during a previous visit to the hospital. Luckily, nature provides a wealth of alternatives when our manmade ingenuity fails to do the trick. Bee products that include both honey and propolis have been found to be effective remedies against this tenacious bug.

MRSA is a type of staph bacteria. It is a potentially deadly bacteria that is found in hospitals throughout the world. It was first discovered in 1961, as doctors discovered that this type of staph could stand up to not just methicillin but also penicillin, oxacillin and amoxicillin. Much of it is now completely resistant to most antibiotics, leaving medical practitioners with fewer and fewer treatment options. Most people have read at least one article in their local paper about a nearby MRSA outbreak.

Staph and even MRSA can live on the human body without causing any harm. About one-third of the population has staph bacteria living in their noses. Two out of every hundred carry MRSA. It is when the bacteria gets inside the body that it can cause serious harm.

In most cases, MRSA causes skin lesions and ulcers. Because of this, it is often referred to as "skin-eating bacteria." MRSA, however, can also infect the lungs, your bloodstream, your urinary tract or surgical wounds.

Most people are able to heal from MRSA infections over time. In a growing number of cases, though, the bacteria continues to grow and attack.

However, there is good news associated with bee products propolis and honey. Early research is indicating that they can kill even resistant strains of bugs like E. coli and MRSA.

What Is Propolis and How Does It Help with MRSA?

Propolis is sometimes called "Russian Penicillin" because of its ubiquity in Eastern European countries' medicine chests. Bees make this substance from a combination of beeswax, plant resin and their own saliva. They use it to plug up drafts in their hive, keeping it clean, secure and safe.

Research into propolis has shown that it can enhance wound healing, which may help protect against MRSA. In a study on rats, a propolis ointment was put on wounds for a period of 14 days. Those who were treated saw quicker healing and lower rates of infection.

In another study published in PlosOne, propolis was combined with chitosan and exposed to Straphylococcus epidermidis,  a common bacteria of the skin.   It is resistant to several antibiotics and particularly dangerous for those with compromised immune systems.    The combination of propolis and chitosan decreased the survival of the dangerous bacteria by 70% while also having a synergistic effect with four common antibiotics.    This suggests that propolis may be even more effective when used in combination with common drugs while helping to decrease the treatment dose.

Both propolis and honey have been shown to be effective when it comes to combating antibiotic resistant bacteria. A recent study that involved buckwheat honey showed that honey was an effective bactericide. In the study, they researched the effects of both honey and a high-sugar artificial honey substitute. The buckwheat honey killed bacteria that included staph, clostridium difficile and several others. Honey was found to effectively kill all where regular antibiotics had failed.

Researchers are continuing to work with propolis to find the most effective ways that hospitals can use this powerful substance to protect their patients. In the meantime, consuming bee propolis anytime you plan to enter a hospital can be a helpful step. One solution involves keeping a small bottle of propolis tincture with you when you enter the hospital for a visit or for treatment of your own. By keeping it on hand when you are in a place where MRSA is a risk, you can help protect yourself against infection.

As microbes continue to adapt to our attempts to eradicate them with antibiotics, it helps to look back at natural and traditional options for protecting against infections and healing injuries. Look to bee products to guard against deadly diseases like MRSA and keep yourself and your family healthy.