Could Honey Be a Natural Cancer Vaccine? 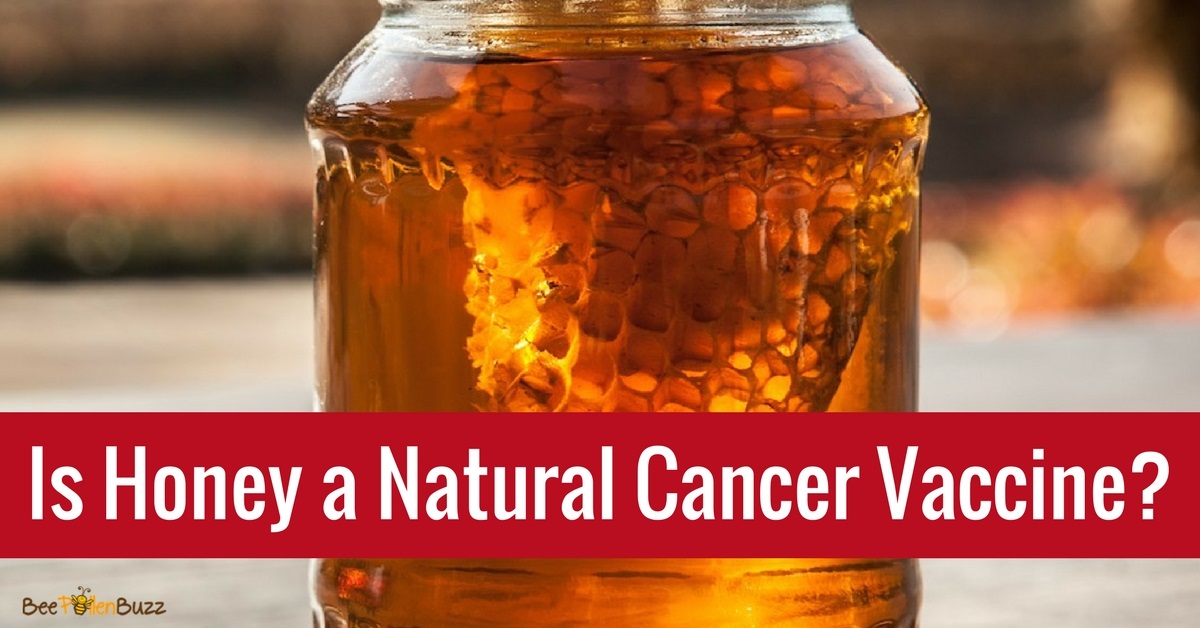 Cancer is on the rise in most countries and let's be honest, the 'c' word scares the heck out of most of us.  We've all been affected by this dreaded disease.   I've lost family to it and chances are you have too.

What concerns me most is that the pharmaceutical industry continues to take the same approach to treating cancer even after decades of poor results.   Why are low cost, simple foods like honey not being studied more intensely when they show such promise as potential therapies?  The answer is a complicated one but you can be sure that money is certainly part, if not entirely the reason.

Published, scientific studies have shown that honey improves immune status, has anti-inflammatory and anti-microbial properties and promotes the healing of chronic ulcers and wounds and is a potent free radical scavenger.  More recently, honey has been shown to have anti-cancer properties in both animal models and in test tube studies, many of which I have written about here at Bee Pollen Buzz.

With these promising characteristics now validated scientifically, is it safe to say that raw, natural honey is the world's first natural cancer vaccine?

Cancer is a global epidemic with 21.7 million new cancer cases expected to be diagnosed around the world by 2030.

The causes of cancer can be categorized as follows:

Cancer is caused by genetic damage in the genome of cells. This damage is either inherited or acquired throughout life. The acquired genetic damage is often ‘self-inflicted’ through an unhealthy lifestyle.  Roughly speaking, one third of cancer is due to tobacco use, one third due to dietary and lifestyle factors and one-fifth due to infections.

Many cancers are associated with aging. Although one's age is not an important determinant of cancer risk, the older you are suggests that you've been exposed to cancer causing carcinogens longer.

Why is Honey Useful in Preventing Cancer?

Honey contains various kinds of phytochemicals with high phenolic and flavonoid content which contribute to its high antioxidant activity.  Any substance that has strong antioxidant properties may have the potential to prevent the development of cancer as free radicals and oxidative stress play a significant role in inducing the formation of cancers.

Honey is a Natural Anti-Inflammatory

In general, inflammatory responses are beneficial.   Chronic inflammation on the other hand, can be detrimental to health and may lead to the development of cancer according to studies.

Honey is a potent anti-inflammatory agent. In one study, infants suffering from diaper rash improved significantly after topical application of a mixture containing honey, olive oil and beeswax after only 7 days.

In another study, it was shown that honey provides significant relief of cough in children with upper respiratory tract infection.  It has also been shown to be effective in the management of dermatitis and psoriasis.  Researchers found that eight out of 10 patients with dermatitis and five of eight patients with psoriasis showed significant improvement after 2 weeks using a honey-based ointment.

While none of these conditions are cancerous, long term, chronic inflammation is linked to cancer.   Controlling inflammation with low cost, natural honey may reduce your cancer risk.

Honey is a Free Radical Scavenger

The association of cigarette smoking to cancer is extremely well established. The long term exposure to toxic free radicals and oxidative stress caused by smoking is what induces cancer in smokers.

Smoking is associated with a number of cancers such as larynx, bladder, breasts, oesophagus and cervix.

Antioxidants, abundant in natural honey, are free-radical scavengers.  The amino acid composition of honey is an indicator of the toxic radical scavenging capacity and some of the highest antioxidant rated foods in the world are darker colored honeys.

Polyphenols found in honey include:

It is imperative that you use honey products with these active compounds in them if cancer prevention is your goal.   While it is cost prohibitive to send your honey away for laboratory analysis, here are some tips to ensure that the honey you purchase contains polyphenols and flavonoids:

Honey is a potent natural antimicrobial.   It kills bacteria by disturbing the cell division machinery so that the bacteria can't divide and grow.  Studies have shown that chronic infections have risk for cancer development.

Bacteria which have been studied to have associations with cancer are:

There are three main mechanisms by which infections can cause cancer.  They appear to involve the initiation as well as promotion of carcinogenesis.  Persistent infection induces chronic inflammation and is then accompanied by the formation of reactive oxygen and nitrogen species which have the potential to damage DNA, proteins and cell membranes/

Besides bacteria, honey also has been shown to have anti-viral properties. In a comparative study, topical application of honey was found to be better than Acyclovir (an antiviral drug used especially in the treatment of herpes and AIDS) treatment on patients with recurring lesions caused by herpes.

Common viruses which cause cancers are:

According to studies, obese individuals are at a much higher risk to develop cancer. There is a close link between obesity, a state of chronic low-level inflammation, and oxidative stress.

In one study, fat cells were shown to have the ability to enhance the proliferation of colon cancer cells. The greatest risk is for obese persons who are also diabetic, particular those whose body mass index is above 35 kg/m2. The increase in risk is by 93-fold in women and by 42-fold in men, particularly for colon cancer.

In a clinical study on 55 overweight or obese patients, the control group of 17 people received 70 g of sugar daily for a maximum of 30 days while 38 patients in the experimental group received 70 g of raw honey for the same period. Results showed that honey caused a mild reduction in body weight.

Not only do studies show that honey can help control body weight, which helps lower cancer risk, but it has also been shown to be effective for blood sugar control and diabetes.  Another study revealed significant decreases in body fat levels, fasting blood sugar, total cholesterol, serum triglycerides, and low-density lipoprotein (the 'bad' cholesterol) resulting from 12 weeks of honey consumption.

Honey As a Cancer Therapy?

Honey is rich in flavonoids and this is likely the reason for its strong activity against cancer cells.  Flavonoids have created a lot of interest among researchers because of their anticancer properties.

The mechanisms suggested are rather diverse and include:

Breast cancers developed in rats show smaller tumor size and lesser number of tumors compared to controls when the rats were fed on various doses of honey. Honey is thought to mediate these beneficial effects due to its major components such as chrysin and other flavonoids.

Using Honey as a Cancer Vaccine

Raw, natural honey appears to have strong anti-cancer potential.   The question is how much to use before one gets cancer to best optimize your anti-cancer defenses.   Because there is almost no profit incentive for pharmaceutical companies to study this question, we are left to make our own best estimate based on the limited studies done in humans.    We need to determine at what dose does honey possess biological activity in humans.

We know from studies that honey has strong biological activity at doses as low as 2.5 ml per day  (in children) all the way up to 70 grams per day in adults, which is  3.5 tablespoons per day.   Obviously, this is a very large range.

From a successful diabetes study done in humans, we know that participants were given honey in a dose of 0.5 mL/kg body weight per day for 12 weeks.   In a 150 lb person, this would equate to 35 ml of honey per day which is less than a quarter cup.    So this gives us a range in which we know honey to be active in the body.    There is no guarantee but it gives us a strong starting point.

One thing that is quite certain from the studies is that honey needs to be consumed long term to be a successful cancer preventative.   This is likely due to the need to keep antioxidant levels elevated in order for them to be effective.

To summarize how to use honey as a natural cancer vaccine, here is what you need to remember: