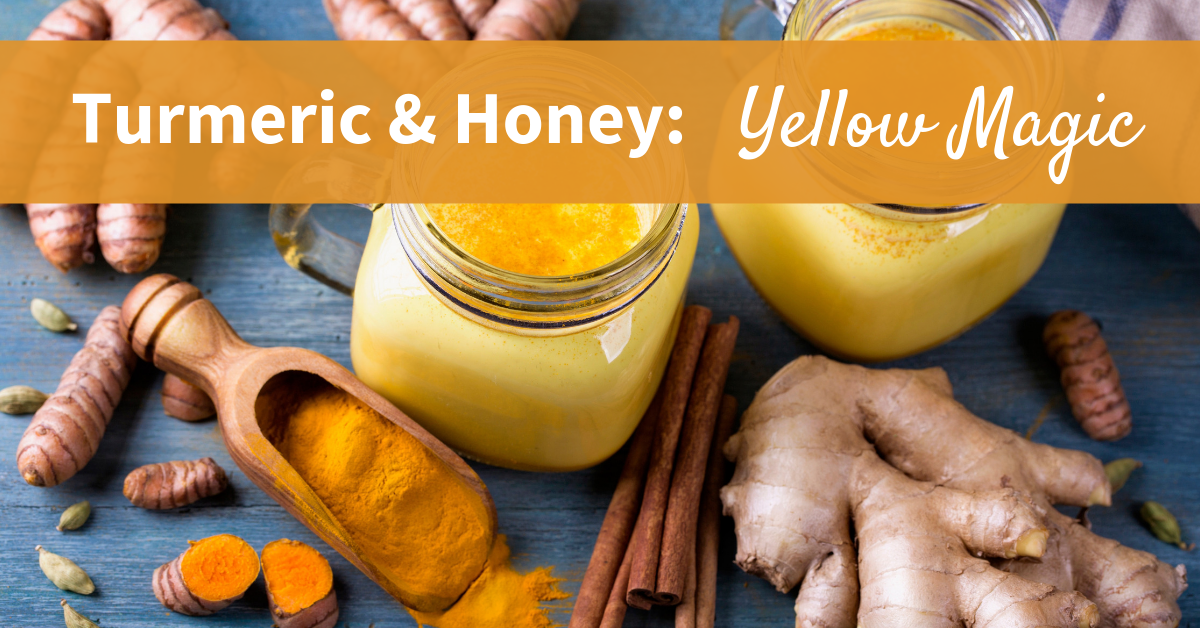 Learn how Yellow Magic,  the Turmeric and Raw Honey health elixir can reduce your cancer risk, protect your brain and boost your immunity to levels reserved for the immortal

As someone concerned with natural and delicious ways to boost your health and energy levels, you've probably seen a lot about turmeric lately. This ancient spice, found in many a home's kitchen cabinets, has become a darling in research and natural health circles lately. When paired with honey, researchers have discovered that this substance can have some powerful healing benefits.

What Are Turmeric and Curcumin?

Turmeric is a root in the ginger family that is native to Southeast Asia. It has long been used as both medicine and a seasoning, especially in Indian cuisine. Until recently, the most common way that you would see turmeric in the US is dried and powdered in the spice section of your store. However, fresh turmeric root is becoming more common. It is available in many Asian groceries, natural foods stores and even in many mainstream supermarkets. It can also be purchased in capsules or powders to be used as a health supplement.

Curcumin is the substance in turmeric that gives the spice its vibrant, yellow hue. If you have ever eaten curry, you've eaten a dish that contains healing curcumin. Curcumin is also commonly sold in isolated form as a supplement. It can be used as a bright colored dye for clothing and in cosmetics, as well.

Is Turmeric an Antibiotic?

One of the many potential applications of turmeric and its curcuminoids is in its antimicrobial action. In a number of studies, turmeric has been shown to kill harmful bacteria even when they are resistant to conventional antibiotics.

As more and more people are realizing, our over-reliance on conventional antibiotics are having some serious unwanted side effects. Medical research shows that antibiotics are currently overprescribed. A number of patients who go to the doctor with viral infections are given antibiotics, despite the fact that the pills will have no effect. Antibiotics are also often used in meat production, as they are found to make animals put on weight more quickly.

Turmeric does not work in the same way that conventional antibiotics do. Because of this, it is still in the list of options when we find a pathogen that has developed defenses against our conventional treatments.

The most exciting area of research about turmeric and curcumin lies in its effects when used in harmony with other treatment options, however. For instance, researchers found that, in a lab setting, antibiotics were more effective against bacterial biofilm when used in conjunction with a turmeric solution.

In clinical settings, turmeric has been used in conjunction with honey for the treatment of wounds to protect against infection. The combination can keep harmful bacteria from getting a foothold and help people with injuries heal more quickly.

How to Use Turmeric for Health

A wide range of health benefits have been ascribed to turmeric. Researchers have seen that populations that eat high amounts of foods with turmeric have lower rates of gastrointestinal disorders that include both stomach ulcers and cancer. Turmeric has also been used in Chinese and Ayurvedic medicine as a treatment for disorders that include premenstrual syndrome and many kinds of inflammation.

Turmeric can be taken daily as a supplement or used liberally as a food seasoning. Some people find that they enjoy fresh turmeric root added to daily smoothies or other beverages. Turmeric tea has been enjoyed by people in Okinawa for generations. Some credit daily drinks made with turmeric with the island's famed longevity.

Turmeric can be purchased on its own, or in combination with other spices to make curry powder. Whether alone or in combination, turmeric can make a pleasant addition to a wide range of stews, soups and other dishes. Look through Indian and other cookbooks for ways to add this seasoning to your life.

Healing Benefits of Turmeric and Honey

As we noted earlier, turmeric and honey together have benefits that rise above what each can offer on its own. In Ayurvedic medicine, both ingredients are recognized as strong immunity boosters. Consuming them when you are worried about coming down with a cold during travel or high-stress times can give you a much needed boost. Some use a turmeric and honey infusion as a cold and flu fighter. Simply stir a teaspoon or so of powdered turmeric into a quarter cup of honey, and take throughout the day when you feel a cold coming on.

Skin masks that use both can help to keep skin supple and moisturized. The combination has also been credited with skin healing and younger-looking skin. There are a number of skin mask recipes online that utilize the combination.

One of the most delicious and beneficial ways to capture the combined effects of turmeric and honey is in a recipe known as golden milk. This beverage has long been used in India, where it is known as haldi doodh, to help sooth and relax. Mothers make a glass for their children before bedtime to bring on sleep. It is also a popular beverage when fighting illness.

The recipes for golden milk are highly adaptable. We like the ones best that combine the healing powers of turmeric and honey together.

To make golden milk, start by gently heating one cup of your milk of choice in a saucepan. In India, cow or goat's milk is commonly used. However, if you prefer vegetarian milk options like oat milk, almond milk or another kind, you can use those instead.

Once the mixture is steaming, add either 1 1/2 teaspoons dry, ground turmeric or one tablespoon fresh grated turmeric root. Stir over heat until the milk takes on a golden color.

Now, sweeten with honey to taste. A teaspoon or two is usually just the right amount.

The golden milk can be consumed hot, or chilled to drink cold. You can also infuse this potion with other herbs and spices, such as black peppercorns, ginger or cinnamon.

Add supportive and beneficial foods like golden milk to your diet every day. These foods are especially beneficial when they are supplanting unhealthy options. For instance, a cup of golden milk can satisfy a craving for sweets while providing benefits that hot chocolate or a sugary latte cannot. By choosing the right foods daily, you can keep yourself healthier, get sick less often, and enjoy a more energetic life.